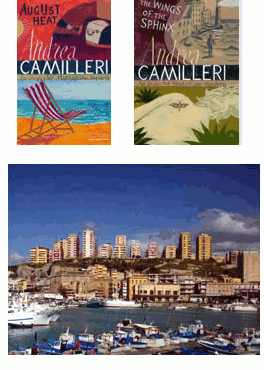 On the trail of Salvo Montalbano:  Literary tour covering the places described in Camilleri's novels

Vigata and Montelusa are places that cannot be found on the map but which are geographically located in the area between the hill of Girgenti and the Sea of Africa.. Semi- imaginary places that are inexistant insofar as their boundaries can be moved according to the author's narrative needs but real at the same time: Porto Empedocle is Vigata with its streets, abandoned factories, Pasture, lighthouse, flat rock, Salita Granet, Marinella beach, "Commissariato" in Lincoln Street, Monte Crasto, Restaurant San Calogero and Trattoria da Enzo  and Girgenti is Montelusa with the Commissioner's Office and Rabato district.

Without waiting for Pino's answer, he slipped into one of those midget high-rises that were not more than twelve stories high, having been built around the same time as the chemical works and having just as quickly fallen into ruin, when not abandoned altogether. For someone approaching from the sea, Vigata rose up like a parody of Manhattan, on a reduced scale .. Andrea Camilleri The shape of water

Salvo Montalbano and the other members of Vigata's small police force. Mimì Augello, Montalbano's second-in-charge, Fazio, Gallo, Galluzzo and the incredibly stupid yet likeable Catarella, who mans the station's phones.
The tour starts in the city centre of Montelusa (Agrigento): here we find the Commissioner's office (Questura)and Piazza San Francesco, the place where the very idea of Vigata came to Camilleri's mind. We walk along Via Atenea to the Santo Spirito Library where Montalbano finds the book that helps him understand the mystery of the Terracotta Dog
Transfer to Villaseta (The Snack Thief ) and continue to Vigata, passing by the Pasture. Stop at the Tower of Charles V (described in Camilleri's first book) and at the pier to admire the sight of Vigata from the sea. Later, we walk in Vigata city centre to Salita Granet and Caffè Vigata with references to various works of Andrea Camilleri that are set there (The shape of water, The scent of the night, The terracotta dog, The excursion to Tindari, The voice of the violin). Leisure time to partake the small towm atmosphere which surrounds Camilleri's characters Continue to Marinella (Montalbano's house) and Scala dei Turchi another place often described in the novels

Driving time: 2 and a half hours from Taormina, 2 hours from Catania,  half an hour from Licata and one hour from Siracusa

If you have a favourite Montalbano novel let us know and we will arrange a custom tour for you.